Unit Testing of Vuex Actions with Mocha and Sinon

Unit testing your Vuex-powered state management includes verifying getters, mutations, and actions. Because of the synchronous nature of getters and mutations, testing them is straight forward. On the other hand, testing actions can be sometimes tricky since most of the time asynchronous code is involved. Especially testing the key functionality of your actions is not easy – are your actions dispatching mutations correctly in the right context with the right arguments?

This article is only concerned with testing actions. Because it took me quite some time to figure out how I can establish a testing strategy that allows for code coverage of 100%, I hope my article offers you some helpful information on this topic.

This article is structured into the following parts:

First, I explain my testing concept, which libraries I use, as well as the testing skeleton. After that, I go into details on how to mock Vuex’s commit function and how to cope with asynchronous code, e.g., REST calls.

The easiest way to have a Vue.js project setup with Mocha and Sinon in place is to use the official Vue.js Webpack Template. Start the wizard with the following shell command:

This installs all required npm modules for you.

Recently, using [Jest] with Vue has came up. At the end of this article, I reveal my thoughts on this topic.

The next code snippet represents our skeleton for testing Vuex actions.

Let’s go through the import statements to see which technologies are involved. Sinon.js (short Sinon) provides standalone test spies, stubs, and mocks that can also be used with Mocha. Mocha represents the testing framework. I also utilize Chai that constitutes a BDD assertion library. Sinon-Chai allows for writing nice Chai assertions together with mocking capabilities provided by Sinon. The following line extends Chai with further assertions for Sinon.

Besides Sinon, there are alternative ways for mocking dependencies. I also use Axios Mock Adapter to isolate the actual remote calls. In addition, it offers a powerful feature to test actions with different remote call responses. E.g., you can verify that a remote call was successful.

Later, I show you testing examples using AxiosMock. In order to ensure that every test is independent from each other, created mocks need to be destroyed after every test. The following beforeEach function does exactly this:

With the help of the following import statement, I bring in my helper function to verify that Vuex actions dispatch mutations correctly.

In the next section, I walk through this helper function in great detail since it is the crucial part of my testing strategy.

How to Implement Action Tests?

Before I answer this question, let’s have a quick recap of a Vuex action.

Besides the fact, that virtually every time a remote call is performed (we deal with this fact later), an action will commit one or more mutations based on the context. A context arises, e.g., by a remote call response or by providing particular function arguments, e.g., a state or an action payload.

The main purpose of actions is to dispatch or commit mutations, respectively. Thus, most of the time I want to verify that Vuex’s commit function is invoked correctly with the right arguments. Since I do not want to invoke the actual mutation implementation, I have to mock the commit function. In the next section we deal with this aspect.

Based on the official Vuex documentation for testing actions, I created a file named testUtils.js as testing helper. In principle, Vuex’s documentation provides all necessary information. However, I had a hard time to understand the mechanism due to the fact that it is spare on the topic of testing actions.

I utilize testAction function in tests in order to verify that the action under test invokes the correct mutations with right arguments and in right order.

Before I go into implementation details of the helper function, I show you how I want to use it later in tests.

The example above verifies that the Vuex action "loadNextBreakfast" commits the expected mutations, described with the array expectedMutations. type and payload represent the arguments of Vuex’s commit function. I also want to verify inside the helper function that the correct mutations were triggered with the correct arguments. payload can be null, if a mutation needs to be committed with a type only. actionPayload and state are optional arguments and, thus, can be null. If the action under test needs to operate on state and / or requires a payload object as input, you have to provide it with these two arguments.

testAction contains the logic to mock the commit function.

I think it might help to break the code into pieces and explain it step by step. Let’s start with the function arguments.

Next up, the function body:

testAction declares a count variable initialized to 0 outside of the mock commit function. count gets increased whenever commit is invoked by the action that gets this mock commit passed as argument.

The whole process is triggered by calling the actual action inside the else clause. action refers to the Vuex action under test that is passed as argument to testAction. Besides our mock commit function, I also pass a mock state and an actionPayload as arguments to testAction. The if clause handles the case that an action does not commit any mutation. done() is important to signal Mocha that the asynchronous test code is completed.

Finally, I take a closer look at the arrow function that constitutes the mock commit function.

First, I extract the mutation with the current count from the passed expectedMutations array. Remember, such a mutation object looks like this:

Then, I verify that type and payload do match. Since not every mutation needs a payload, I verify that the payload object is defined. It is important to call done() if all expected mutations have been dispatched, otherwise I get a Mocha error. Additionally, I use a try-catch block for the same reason in order to terminate the unit test in case of an exception.

In summary, the test above verifies that "loadNextBreakfast" action dispatches two mutations with right type and payload in correct order.

Thus, the task is to mock axios.get().

In the next section, I present two approaches to prevent the invocation of the actual implementation of axios.get(). First, testing use case 2 leverages AxiosMock to circumvent the original axios call. Testing use case 3 demonstrates how Sinon can be used to have external dependencies under control.

Overview of Testing Use Cases

As described in great detail in the previous section, mocking commit is crucial for testing Vuex actions.

Such a test sets up testAction’s arguments first and then calls it. Then it checks whether the expectations (defined by expectedMutations) are fulfilled. For a detailled description on how testAction works, go to the section about mocking Vuex’s commit function.

Remember, I created a mock property in the testing skeleton:

I utilize mock to check whether the action under test operates correctly for successful and failing axios calls. In the following snippet, the first test is an example for a remote call responding with status code of 200. The second test checks that the correct mutation is dispatched in case of a network error.

Axios Mock Adapter offers a nice API to easily mock server responses, such as status codes or network errors. It is easy to use. Just setup the desired server response before you actually call the action under test. Then, the axios call inside of the action implementation is replaced with the mock version. However, if you just want basic mocking of axios, you can also use Sinon as described next.

This technique can also be used to mock any external code, not only axios calls. Take a look at the following action "toggleAvailability" that follows an "optimistic update" approach – i.e., trigger a mutation immediately without waiting for a remote call to return. Perform a rollback in case of a remote call error with the help of a "compensating commit" (mutationTypes.FAILED_SET_PARTICIPATION).

This example action has two contexts:

For the purpose of this article, it is not necessary to understand the whole implementation of this example action. Futhermore, it is not required to either know the Stomp protocol nor have knowledge how browser notifications work. No implementation details are relevant for the sake of this article and, thus, skipped. The provided action is a good example of how to isolate such external dependencies and instead concentrate on the actual code that is in scope of the action.

After setting up stubs, state, and payload, this test verifies that the action named "toggleAvailability" spawns a notification but does not perform a remote call. With this kind of unit test I’m not interested in verifying that correct mutations are dispatched (see testing use case 1). Therefore, I also use Sinon to mock commit and just pass it as argument to the action function.

Latest vue.js webpack template has moved to Jest, this reduces test run time to a couple of seconds.🎉😂 Was quite easy to upgrade as well, and support for HTTPS in webpack dev server is 💯 #vuejs https://t.co/WZ5SY2mWd8

I leave undecided which technology is better because I haven’t looked into Jest yet. However, I see a lot of articles and tweets about people moving from Mocha to Jest.

We are moving from Mocha+chai to Jest.

The main benefit is test isolation: we have some suboptimal test polluting/depending on the global state and we want to prevent that with Jest.

Jest is especially popular for its snapshot testing. It also comes with mocking capabilities. However, most of the time, I have come across articles about Jest and how to use it for component testing. At least Lachlan Miller wrote about using Jest for testing Vuex actions.

It seems that one of Jest’s benefits is its performance. Edd Yerburg, one of the authors of vue-test-utils, gave a talk about testing Vue components and provided a comparison of Vue SFC unit tests using different test runners.

Up to now, it is not clear for me, if there are any obvious advantages of Jest over Mocha in terms of unit testing Vuex code.

Leaving the discussion out, which testing technology performs better, it is important to test your Vuex actions. With the testing approaches above (using Mocha), it is possible to have a 100% code coverage of Vuex actions as depicted in the next screenshot. I think you can also replace Mocha with Jest very easily and get the same test coverage.

Maybe you have the same attitude like me that actions are one of the most important but also most complex parts of your Vue.js application. That’s why testing them entirely is crucial! 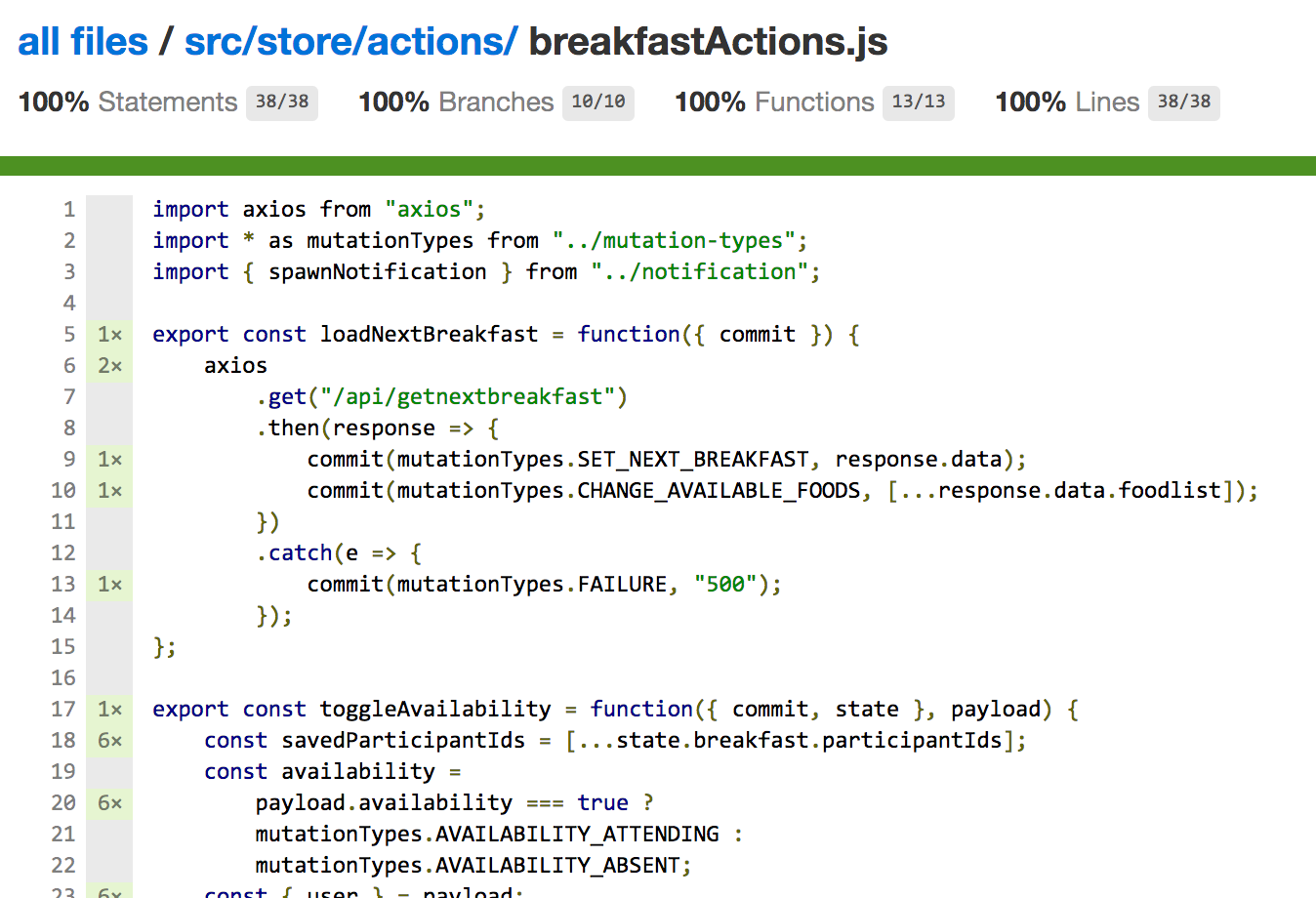 Another good thing, if you establish such a testing approach, is that you also gain a better understanding of Vuex. Thereby, you become a better Vue developer.

It would be nice if you let me know what you think about my testing approach in the comments. How do you test your Vuex code?